Mortgage applications increased 55.4 percent from one week earlier, according to data from the Mortgage Bankers Association’s (MBA) Weekly Mortgage Applications Survey for the week ending March 6, 2020.

... The Refinance Index increased 79 percent from the previous week to the highest level since April 2009, and was 479 percent higher than the same week one year ago. The seasonally adjusted Purchase Index increased 6 percent from one week earlier. The unadjusted Purchase Index increased 7 percent compared with the previous week and was 12 percent higher than the same week one year ago.
...
“Market uncertainty around the coronavirus led to a considerable drop in U.S. Treasury rates last week, causing the 30-year fixed rate to fall and match its December 2012 survey low of 3.47 percent. Homeowners rushed in, with refinance applications jumping 79 percent – the largest weekly increase since November 2008,” said Joel Kan, MBA’s Associate Vice President of Economic and Industry Forecasting. “With last week’s increase, the refinance index hit its highest level since April 2009. The purchase market also had a solid week, with activity nearly 12 percent higher than a year ago. Prospective buyers continue to be encouraged by improving housing inventory levels in some markets and very low rates.”

Added Kan, “Taking into the account the current economic situation and how much rates have fallen, MBA is nearly doubling its 2020 refinance originations forecast to $1.2 trillion, a 37 percent increase from 2019 and the strongest refinance volume since 2012. As lenders handle the wave in applications and manage capacity, mortgage rates will likely stabilize but remain low for now. This in turn will support borrowers looking to refinance or purchase a home this spring.”
...
The average contract interest rate for 30-year fixed-rate mortgages with conforming loan balances ($510,400 or less) decreased to the lowest level since December 2012, equaling the lowest level in survey history at 3.47 percent, from 3.57 percent with points increasing to 0.27 from 0.26 (including the origination fee) for 80 percent loan-to-value ratio (LTV) loans.
emphasis added 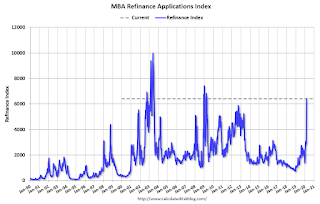 With record lower rates, we saw a huge increase in refinance activity in the survey this week. 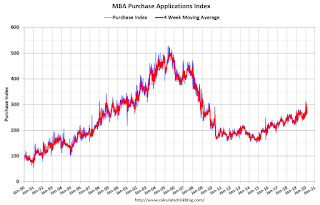 According to the MBA, purchase activity is up 12% year-over-year.

A key question is will low mortgage rates bring in more buyers, or will people hold off buying a home during the health crisis (as happened in China).  So far people are still buying according to this survey.
Posted by Calculated Risk on 3/11/2020 07:00:00 AM
Newer Post Older Post Home