Mortgage applications decreased 8.4 percent from one week earlier, according to data from the Mortgage Bankers Association’s (MBA) Weekly Mortgage Applications Survey for the week ending March 13, 2020.

Added Kan, “Purchase activity was flat but remained over 10 percent higher than a year ago. The purchase market was on firm footing to start the year and has so far held steady through the current uncertainty. Looking ahead, a gloomier outlook may cause some prospective homebuyers to delay their home search, even with these lower mortgage rates.”
...
The average contract interest rate for 30-year fixed-rate mortgages with conforming loan balances ($510,400 or less) increased to 3.74 percent from 3.47 percent, with points increasing to 0.37 from 0.27 (including the origination fee) for 80 percent loan-to-value ratio (LTV) loans.
emphasis added 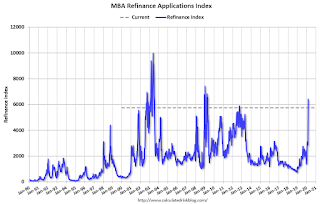 With record lower rates, we saw a huge increase in refinance activity in the survey over the last two weeks. 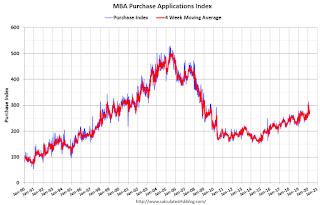 According to the MBA, purchase activity is up 11% year-over-year.

A key question is will low mortgage rates bring in more buyers, or will people hold off buying a home during the health crisis (as happened in China). So far people are still buying according to this survey.
Posted by Calculated Risk on 3/18/2020 07:00:00 AM
Newer Post Older Post Home