Industrial production rose 0.6 percent in February after falling 0.5 percent in January. Manufacturing output edged up 0.1 percent in February; excluding a large gain for motor vehicles and parts and a large drop for civilian aircraft, factory output was unchanged. The index for mining declined 1.5 percent, but the index for utilities jumped 7.1 percent, as temperatures returned to more typical levels following an unseasonably warm January. At 109.6 percent of its 2012 average, the level of total industrial production in February was unchanged from a year earlier. Capacity utilization for the industrial sector increased 0.4 percentage point in February to 77.0 percent, a rate that is 2.8 percentage points below its long-run (1972–2019) average.
emphasis added 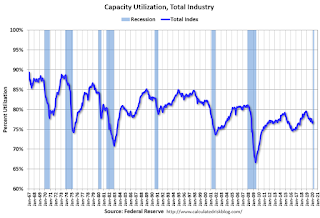 This graph shows Capacity Utilization. This series is up 10.3 percentage points from the record low set in June 2009 (the series starts in 1967). 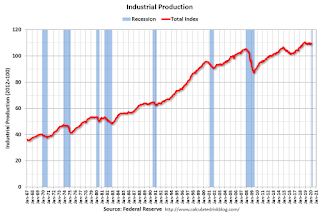 Industrial production increased in February to  109.6. This is 25.9% above the recession low, and 4.0% above the pre-recession peak.

The change in industrial production was above consensus expectations.