From HotelNewsNow.com: STR: US hotel results for week ending 29 February


The U.S. hotel industry reported mixed year-over-year results in the three key performance metrics during the week of 23-29 February 2020, according to data from STR.

In comparison with the week of 24 February through 2 March 2019, the industry recorded the following:

Occupancy and ADR declines for the week were most pronounced on the weekend (28-29 February). Also of note, U.S. airport hotels reported a 3.8% decrease in occupancy for the week.

“We continue to monitor performance in proximity to U.S. airports for early indicators of a coronavirus impact,” said Jan Freitag, STR’s senior VP of lodging insights. “What stands out are the demand patterns in airport markets that see a greater volume of international traffic. We saw declines in airport markets like Newark, Chicago, Denver, San Francisco and New York, while markets with a lot of domestic traffic like Orlando, Dallas and Atlanta were actually up for the week. The coming weeks will be important to monitor for more defined trends, especially with increased coverage around the outbreak and potential event schedule adjustments.”
emphasis added 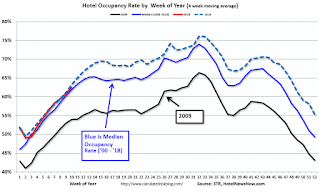 2020 was off to a solid start, however, COVID-19 appears to already be having a negative impact on occupancy.  To date, this is the weakest start for a year since 2014 - and the seasonally important Spring travel season is just about to begin.
Posted by Calculated Risk on 3/05/2020 09:22:00 AM
Newer Post Older Post Home