From HotelNewsNow.com: STR: US hotel results for week ending 21 March


Showing further effects of the COVID-19 pandemic, the U.S. hotel industry reported significant year-over-year declines in the three key performance metrics during the week of 15-21 March 2020, according to data from STR.

In comparison with the week of 17-23 March 2019, the industry recorded the following:

“RevPAR decreases are at unprecedented levels—worse than those seen during 9/11 and the financial crisis,” said Jan Freitag, STR’s senior VP of lodging insights. “Seven of 10 rooms were empty around the country. That average is staggering on its own, but it’s tougher to process when you consider that occupancy will likely fall further. With most events cancelled around the nation, group occupancy was down to one percent with a year-over-year RevPAR decline of 96.6%. The industry is no doubt facing a situation that will take a concerted effort by brands, owners and the government to overcome.”
emphasis added 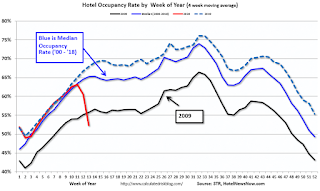 This is the lowest weekly occupancy on record, even considering seasonality, and STR expects occupancy rates to fall further.  Note the graph is a 4-week average.
Posted by Calculated Risk on 3/26/2020 11:16:00 AM
Newer Post Older Post Home