From the Census Bureau reported that overall construction spending increased in January:


Spending on private construction was at a seasonally adjusted annual rate of $1,022.7 billion, 1.5 percent above the revised December estimate of $1,007.6 billion. ...

In January, the estimated seasonally adjusted annual rate of public construction spending was $346.5 billion, 2.6 percent above the revised December estimate of $337.8 billion. 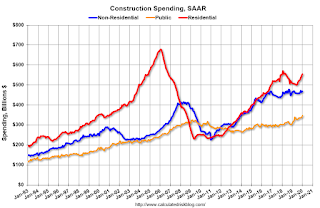 Private residential spending had been increasing - but turned down in the 2nd half of 2018.  Now it is increasing again, but is still 18% below the bubble peak.

Non-residential spending is 13% above the previous peak in January 2008 (nominal dollars).

Public construction spending is 6% above the previous peak in March 2009, and 32% above the austerity low in February 2014. 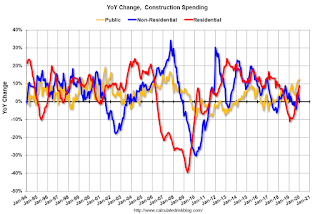 This was well above consensus expectations of a 0.7% increase in spending, construction spending for November and December were revised up.
Posted by Calculated Risk on 3/02/2020 10:20:00 AM
Newer Post Older Post Home