The data through February were unlikely to have been affected much by the COVID-19 outbreak. Economic data for March will be incorporated in the next CFNAI released on April 20, 2020.

Led by improvements in production-related indicators, the Chicago Fed National Activity Index (CFNAI) rose to +0.16 in February from –0.33 in January. Two of the four broad categories of indicators that make up the index increased from January, and three of the four categories made positive contributions to the index in February. The index’s three-month moving average, CFNAI-MA3, decreased to –0.21 in February from –0.11 in January.
emphasis added 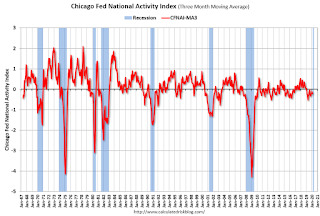 This suggests economic activity was below the historical trend in February (using the three-month average).