Black Knight Mortgage Monitor for January; "Cash-out lending hit a more than 10-year high at the end of 2019"

This gives a total of 3.73% delinquent or in foreclosure.

“Despite a surge in refinance lending driven by low rates, servicers continue to struggle in their efforts to recapture refinancing borrowers, with only one in five being retained by servicers in Q4 2019,” said Graboske. “Retention rates rose along with refinance volumes early last year, hitting an 18-month high in Q2 2019, but retention rates have since fallen in each of the past two quarters. Fewer than one in four borrowers refinancing to lower their rate or term – business which has been historically easier to retain – stayed with their servicer post-refinance in Q4 2019. A large driver has been a recent failure to retain 2018 vintage mortgages, which goes to show just how quickly lender/borrower relationships can evaporate without the right data and tools for servicers to early on identify clients in their portfolios with sufficient tappable equity, and act to retain them. Borrowers who left for ‘greener pastures’ received an average 0.08% lower interest rate than those who stayed, strengthening the need for tools to ensure rate pricing is competitive. Retention challenges are even more pronounced among cash-out refinances, for which retention rates fell from 19% in Q3 2019 to just 17% in Q4 2019, the lowest in more than four years. At the same time, cash-out lending hit a more than 10-year high at the end of 2019, with some 600,000 borrowers pulling an estimated $41B in equity from their homes, the largest quarterly volume since 2007.

“Lenders and servicers should take note – there are currently 44.7 million homeowners with equity available to tap via cash-out refinance or HELOC, with the average homeowner having $119K in equity. At $6.2 trillion, total tappable equity – the amount available to homeowners with mortgages to borrow against while still retaining at least 20% equity in their homes – hit its highest year-end total on record. What’s more, the same falling interest rates that have reheated the housing market have also increased the rate of equity growth for the third consecutive quarter. Tappable equity grew 9.0% year-over-year in Q4 2019, the highest such growth rate since Q3 2018. Refinance lending is up 250% year-over-year, cash-out lending is at a 10-year high and 75% of homeowners with tappable equity have first lien interest rates at or above today’s prevailing rate. Taking all of this into account, improving the retention and recapture of this business is of critical importance. Data-driven portfolio retention strategies that help determine borrowers’ motivations for refinancing can go a long way in this regard.”
emphasis added 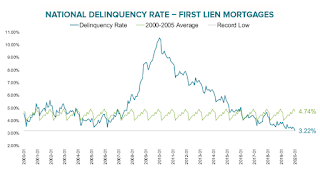 Here is a graph from the Mortgage Monitor that shows the National Delinquency Rate.


• Mortgage delinquencies fell by 5.4% month-over month to the lowest level on record since Black Knight began reporting the metric in 2000

• With annual declines picking up in recent months and tax refund season on the horizon, we could see delinquencies push downward even further 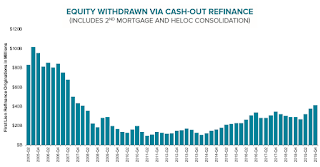 • Approximately 600K homeowners pulled $41 billion in equity via cash-outs in Q4, the largest such volume since mid-2009

• With rates falling below 3.5% in early 2020, cash-out refinance activity is likely to remain strong in coming months

• However, outsized growth in rate/term lending has suppressed the cash-out share of refinance lending, which edged below 50% in Q4 2019 for the first time in three years