From the MBA: Mortgage Delinquencies Decrease in Fourth Quarter of 2019


The delinquency rate for mortgage loans on one-to-four unit residential properties decreased to a seasonally adjusted rate of 3.77 percent of all loans outstanding at the end of the fourth quarter of 2019, according to the Mortgage Bankers Association's (MBA) National Delinquency Survey.

The delinquency rate was down 20 basis points from the third quarter of 2019 and 29 basis points from one year ago. The percentage of loans on which foreclosure actions were started in the fourth quarter remained unchanged at 0.21 percent.

"The mortgage delinquency rate in the final three months of 2019 fell to its lowest level since the current survey series began in 1979," said Marina Walsh, MBA's Vice President of Industry Analysis. "Mortgage delinquencies track closely to the U.S. unemployment rate, and with unemployment at historic lows, it's no surprise to see so many households paying their mortgage on time." 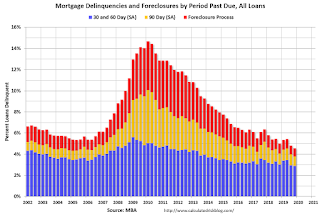 This graph shows the percent of loans delinquent by days past due.  Delinquencies decreased in Q4.

The percent of loans in the foreclosure process continues to decline, and is now at the lowest level since 1985.
Posted by Calculated Risk on 2/11/2020 01:20:00 PM
Newer Post Older Post Home