Mortgage applications increased 5.0 percent from one week earlier, according to data from the Mortgage Bankers Association’s (MBA) Weekly Mortgage Applications Survey for the week ending January 31, 2020. The previous week’s results included an adjustment for the Martin Luther King Jr. holiday.

Added Kan, “Prospective buyers weren’t as responsive to the decline in mortgage rates – likely because of suppressed supply levels. Purchase applications took a step back, but still remained 7.7 percent higher than a year ago.”
...
The average contract interest rate for 30-year fixed-rate mortgages with conforming loan balances ($510,400 or less) decreased to 3.71 percent from 3.81 percent, with points remaining unchanged at 0.28 (including the origination fee) for 80 percent loan-to-value ratio (LTV) loans.
emphasis added 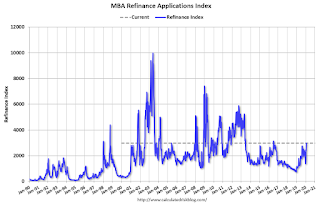 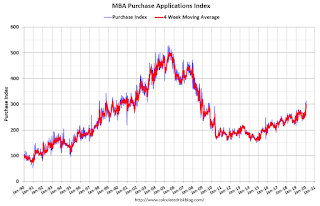