“Regional factory activity finally expanded again in February,” said Wilkerson. “This was despite over 40 percent of firms reporting some negative effect from the spread of coronavirus so far in 2020.”
...
The month-over-month composite index was 5 in February, higher than -1 in January and -5 in December. The composite index is an average of the production, new orders, employment, supplier delivery time, and raw materials inventory indexes. The increase in district manufacturing activity was driven by both durable and non-durable goods plants, particularly food and transportation equipment producers. Most month-over-month indexes moved into positive territory in February, with many reaching their highest levels in over a year. However, the order backlog and employment indexes continued to fall. Year-over-year factory indexes rebounded strongly, with the composite index jumping from -7 to 5. The future composite index remained solid, inching slightly higher from 14 to 16.
emphasis added

This was the last of the regional Fed surveys for February. 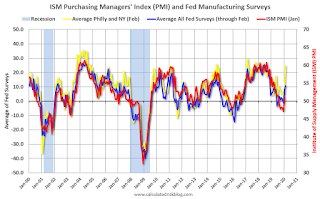 Based on these regional surveys, it seems likely the ISM manufacturing index will increase further in February.
Posted by Calculated Risk on 2/27/2020 11:00:00 AM
Newer Post Older Post Home