The FDIC released the Quarterly Banking Profile for Q4 2019 today:

The Deposit Insurance Fund's Reserve Ratio Stood at 1.41 Percent: The Deposit Insurance Fund (DIF) balance totaled $110.3 billion in the fourth quarter, up $1.4 billion from the end of last quarter. The quarterly increase was led by assessment income and interest earned on investment securities held by the DIF. The reserve ratio remained unchanged from the previous quarter at 1.41 percent. 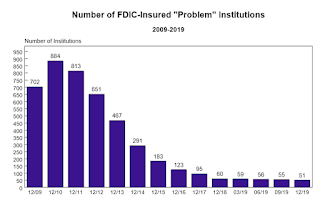 The FDIC reported the number of problem banks declined slightly.

This graph from the FDIC shows the number of problem banks declined to 51 institutions from 60 at the end of 2018.

Note: The number of assets for problem banks increased significantly in 2018 when Deutsche Bank Trust Company Americas was added to the list (it must still be on the list given the assets of problem banks). 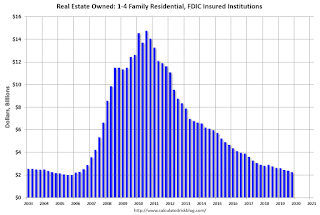 This graph shows the nominal dollar value of Residential REO for FDIC insured institutions. Note: The FDIC reports the dollar value and not the total number of REOs.

Since REOs are reported in dollars, and house prices have increased, FDIC REOs are probably close to a bottom.
Posted by Calculated Risk on 2/25/2020 11:45:00 AM
Newer Post Older Post Home