Way back in 2006 I disagreed with some analysts on the outlook for the Inland Empire in California. I wrote:


As the housing bubble unwinds, housing related employment will fall; and fall dramatically in areas like the Inland Empire. The more an area is dependent on housing, the larger the negative impact on the local economy will be.

So I think some pundits have it backwards: Instead of a strong local economy keeping housing afloat, I think the bursting housing bubble will significantly impact housing dependent local economies. 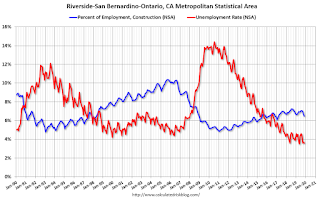 This graph shows the unemployment rate for the Inland Empire (using MSA: Riverside, San Bernardino, Ontario), and also the number of construction jobs as a percent of total employment.

The unemployment rate is falling, and is down to 3.6% (down from 14.4% in 2010). And construction employment is up from the lows (as a percent of total employment), but still well below the bubble years.

So the unemployment rate has fallen to a record low, and the economy isn't as heavily depending on construction. Overall the Inland Empire economy is in much better shape today. 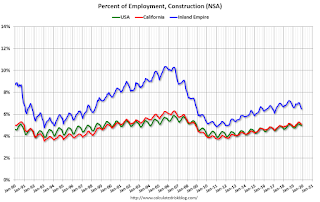 The second graph shows the number of construction jobs as a percent of total employment for the Inland Empire, all of California, and the entire U.S..