The 2019 results extend the protracted expansion to nine years – a near decade that has been dogged by sluggish growth relative to both the apartment sector and historical expansions. The 16.8% vacancy rate is one-third higher than the low vacancy of 12.6% in 2007 and more than twice the rate (8.3%) in 2000. Likewise, annual rent growth of 2.7% is above the low national inflation rate of 1.8%, but well below peak rent growth of 10.5% and 12.3% in those respective years. 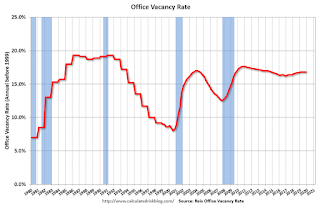 Reis reported the vacancy rate was at 16.8% in Q4.  The office vacancy rate had been mostly moving sideways at an elevated level, but has increased over the last two years.