The Retail Vacancy Rate rose 0.1% in the fourth quarter as overall occupancy declined by 175,000 square feet due to the closure of 16 Kmart stores in 13 metros; Asking and Effective Rent growth was 0.1% in the quarter – the lowest since 2012.

The Mall Vacancy Rate rose 0.3% to 9.7% in the fourth quarter. Asking and Effective Rent growth was flat.
...
The fourth quarter looks like it could be the start of a declining retail market. For more than two years we had remarked how the retail statistics were defying anecdotal reports of a “retail apocalypse.” But this recent data shows that the scales may have tipped as both the retail and the Mall vacancy rate increased in the quarter. The retail rent growth was a scant 0.1% while Mall rents were flat.
...
Thus, our outlook remains cautious: if vacancies continue to rise, they should not do so at a rapid rate given how slowly the numbers have moved over the last two years. Rents should stay flat for the next few quarters. Indeed, consumers continue to buy more clothing and other goods on-line, but they are also spending more on fitness, entertainment and eating out in establishments that lease retail space. We expect these trends to continue in 2020.
emphasis added 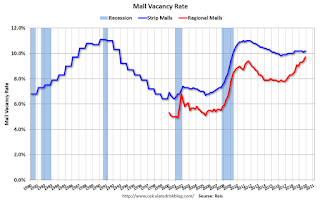