Both the national average asking rent and effective rent, which nets out landlord concessions, increased 0.5% in the fourth quarter. At $1,498 per unit (asking) and $1,426 per unit (effective), the average rents have increased 3.7% and 3.8%, respectively, from the fourth quarter of 2018. This was the lowest annual growth rate in more than two years.

Net absorption of 21,500 units was lower than the previous quarter’s absorption of 46,511 units. Likewise, construction was 30,159 units, lower than the 51,992 completions in the third quarter. With new completions of 176,565 units in 2019, overall apartment supply growth fell well short of the 2018 addition of 265,041 units. Likewise, net absorption of 177,599 units in 2019 fell short of the 2018 total of 235,786 units.
...
Demand for apartments should remain healthy, although it could face new competition from the housing market that could accelerate given the rosier economy and very low mortgage rates. As we have stated in previous reports, the housing vs. apartment markets are not a zero-sum game. As long as job growth remains healthy, the demand for both will stay positive shoring up home prices and rents equally.
emphasis added 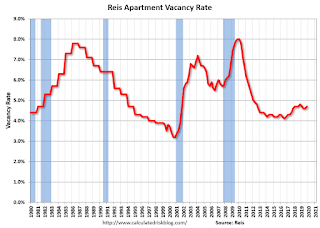 The vacancy rate has mostly moved sideways for the last two years - after increasing from the low in 2016.