The BEA released the Personal Income and Outlays report for December: 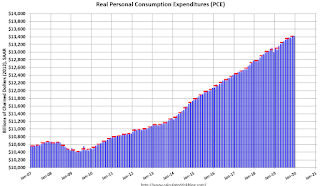 PCE growth was sluggish in Q4, and inflation remains below the Fed's target.
Posted by Calculated Risk on 1/31/2020 09:02:00 AM
Newer Post Older Post Home