I haven't posted this in a few months.

The BLS diffusion index for total private employment was at 57.0 in December, down from 65.7 in November.

For manufacturing, the diffusion index was at 44.7, down from 65.8 in November.

Think of this as a measure of how widespread job gains are across industries. The further from 50 (above or below), the more widespread the job losses or gains reported by the BLS.  From the BLS: 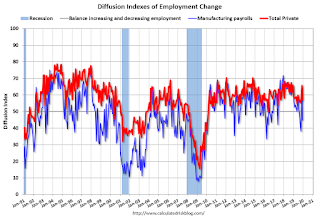 Overall both total private and manufacturing job growth were not widespread in December.

Both indexes generally trended down in 2019 - except for a spike up in November - indicating job growth was becoming less widespread across industries (especially manufacturing).
Posted by Calculated Risk on 1/13/2020 09:59:00 AM
Newer Post Older Post Home