CBO Projection: Annual Budget Deficit to be above 4% GDP for the Next Decade

Remember the promise that the 2017 Tax Cuts and Jobs Act (TCJA) would "pay for itself", and that the current administration would reduce the deficit? Hoocoodanode? ("Who could have known?",Popularized by my former co-blogger Tanta!)

The Congressional Budget Office (CBO) released their new The Budget and Economic Outlook: 2020 to 2030

Other than a six-year period during and immediately after World War II, the deficit over the past century has not exceeded 4.0 percent for more than five consecutive years. And during the past 50 years, deficits have averaged 1.5 percent of GDP when the economy was relatively strong (as it is now).

Because of the large deficits, federal debt held by the public is projected to grow, from 81 percent of GDP in 2020 to 98 percent in 2030 (its highest percentage since 1946). By 2050, debt would be 180 percent of GDP—far higher than it has ever been
emphasis added

The CBO projects the deficit will above 4% for the next decade.  I think their projections are optimistic. 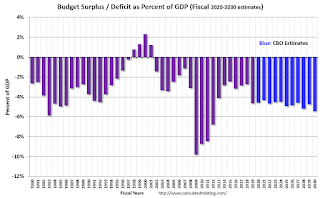 This graph shows the actual (purple) budget deficit each year as a percent of GDP, and an estimate for the next ten years based on estimates from the CBO.

Note: the Federal government's deficit usually increases sharply during a recession - it is the only entity that can be countercyclical - and then decreases during an expansion. So no one should compare the deficit to 2008 (under Bush) or 2009 (under Obama) during the great recession.

From a policy perspective and using these projections, the TCJA was a policy failure on this issue (the TCJA was also a failure on GDP growth, business investment, and the typical tax cut for most Americans).
Posted by Calculated Risk on 1/28/2020 03:57:00 PM
Newer Post Older Post Home