Mortgage applications decreased 5.0 percent from one week earlier, according to data from the Mortgage Bankers Association’s (MBA) Weekly Mortgage Applications Survey for the week ending December 13, 2019.

Added Fratantoni, “2019 was another year of inadequate housing supply in relation to demand. The good news is that the tide could be slowly turning for potential buyers. Housing starts and permits rose strongly in November, and homebuilder confidence has surged to a level not seen since 1999.”
...
The average contract interest rate for 30-year fixed-rate mortgages with conforming loan balances ($484,350 or less) remained unchanged at 3.98 percent, with points remaining unchanged at 0.33 (including the origination fee) for 80 percent loan-to-value ratio (LTV) loans.
emphasis added 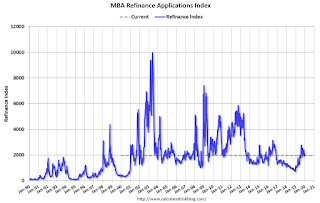 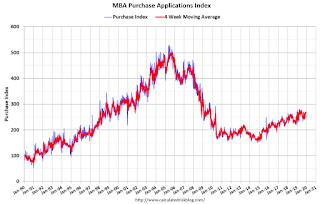