Mortgage applications decreased 9.2 percent from one week earlier, according to data from the Mortgage Bankers Association’s (MBA) Weekly Mortgage Applications Survey for the week ending November 29, 2019. This week’s results include an adjustment for the Thanksgiving holiday.

... The Refinance Index decreased 16 percent from the previous week and was 61 percent higher than the same week one year ago. The seasonally adjusted Purchase Index increased 1 percent from one week earlier. The unadjusted Purchase Index decreased 33 percent compared with the previous week and was 24 percent lower than the same week one year ago.
...
U.S. Treasury rates stayed flat last week, as uncertainty surrounding the U.K. elections offset positive domestic news on consumer spending,” said Joel Kan, MBA’s Associate Vice President of Economic and Industry Forecasting. “Despite the 30-year fixed rate remaining unchanged at 3.97 percent, mortgage applications fell last week, driven down by a 16 percent drop in refinances. Purchase applications were up slightly but declined 24 percent from a year ago. This week’s year-over-year comparisons were distorted by Thanksgiving being a week later this year.”

Added Kan, “The purchase market overall looks healthy as we enter the home stretch of 2019. The seasonally adjusted purchase index was at its highest level since July, as a combination of wage gains, slower home-price appreciation, and slightly easing inventory conditions continue to support increased activity.”
...
The average contract interest rate for 30-year fixed-rate mortgages with conforming loan balances ($484,350 or less) remained unchanged at 3.97 percent, with points increasing to 0.32 from 0.30 (including the origination fee) for 80 percent loan-to-value ratio (LTV) loans.
emphasis added 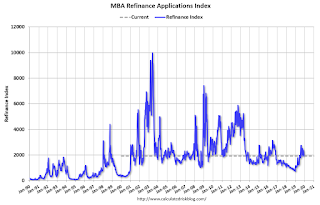 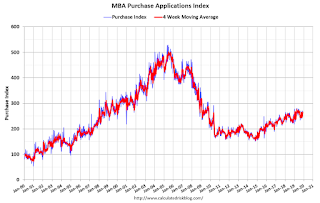 According to the MBA, purchase activity is down 24% year-over-year unadjusted for the Thanksgiving holiday (the timing of the Holiday was different in 2019 compared to 2018).
Posted by Calculated Risk on 12/04/2019 07:00:00 AM
Newer Post Older Post Home