Industrial production and manufacturing production both rebounded 1.1 percent in November after declining in October. These sharp November increases were largely due to a bounceback in the output of motor vehicles and parts following the end of a strike at a major manufacturer. Excluding motor vehicles and parts, the indexes for total industrial production and for manufacturing moved up 0.5 percent and 0.3 percent, respectively. Mining production edged down 0.2 percent, while the output of utilities increased 2.9 percent. 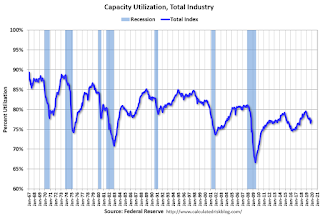 This graph shows Capacity Utilization. This series is up 10.6 percentage points from the record low set in June 2009 (the series starts in 1967). 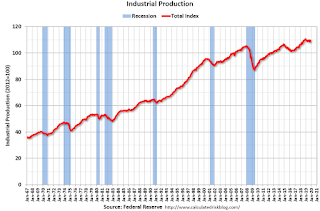 Industrial production increased in November to  109.7. This is 26% above the recession low, and 4.1% above the pre-recession peak.

The change in industrial production and increase in capacity utilization were above consensus expectations.
Posted by Calculated Risk on 12/17/2019 09:22:00 AM
Newer Post Older Post Home