Note: Due to the timing of Thanksgiving, the occupancy rate was down sharply YoY last week. The rate was up sharply in the previous report.

From HotelNewsNow.com: STR: US hotel results for week ending 30 November


he U.S. hotel industry reported negative year-over-year results in the three key performance metrics during the week of 24-30 November 2019, according to data from STR.

In comparison with the week of 25 November through 1 December 2018, the industry recorded the following:

STR analysts attribute significant performance declines to comparison of Thanksgiving week in 2019 against the week that followed the holiday in 2018.
emphasis added 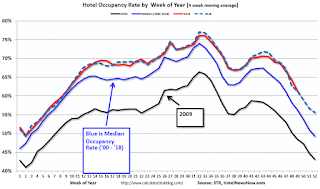 Seasonally, the 4-week average of the occupancy rate will decline into the winter.