"October’s U.S. housing data continue to be reassuring,” says Craig J. Lazzara, Managing Director and Global Head of Index Investment Strategy at S&P Dow Jones Indices. “With October’s 3.3% increase in the national composite index, home prices are currently more than 15% above the pre-financial crisis peak reached July 2006. October’s results were broad-based, as both our 10- and 20-city composites rose. Of the 20 cities in the composite, only San Francisco saw a year-over-year price decline in October.
…
“As was the case last month, after a long period of decelerating price increases, the national, 10-city, and 20-city composites all rose at a modestly faster rate in October compared to September. This stability was broad-based, reflecting data in 12 of 20 cities. It is, of course, still too soon to say whether this marks an end to the deceleration or is merely a pause in the longer-term trend.”
emphasis added 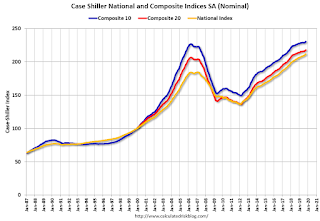 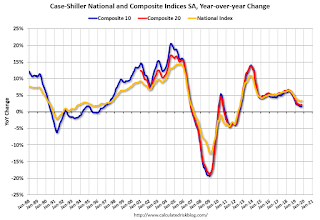 The National index SA is up 3.3% year-over-year.