Back in August I wrote: Don't Freak Out about the Yield Curve

I noted that I wasn't even on recession watch!

First, here is a graph of the current yield curve, and the yield curve back on August 27, 2019. 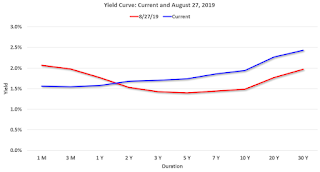 In August, the yield curve was inverted (red).

However - as I noted in August - the Fed was cutting rates this year.