From the Richmond Fed: Manufacturing Activity Softened in November


Fifth District manufacturing activity softened in November, according to the most recent survey from the Richmond Fed. The composite index fell from 8 in October to −1 in November, weighed down by negative readings for shipments and new orders, while the third component — employment — declined but remained positive. Manufacturing firms also reported a drop in backlog of orders, but the indicator for local business conditions held fairly steady. Survey respondents were optimistic that conditions would improve in the coming months.

Survey results suggested modest employment growth and rising wages in November. However, firms continued to struggle to find workers with the necessary skills. Respondents expected this struggle to persist and employment and wages to continue to grow in the near future.
emphasis added 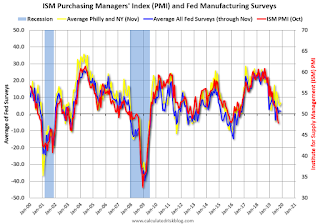 Based on these regional surveys, it seems likely the ISM manufacturing index for November will be weak again.
Posted by Calculated Risk on 11/26/2019 02:44:00 PM
Newer Post Older Post Home