Mortgage applications decreased 2.2 percent from one week earlier, according to data from the Mortgage Bankers Association’s (MBA) Weekly Mortgage Applications Survey for the week ending November 15, 2019. This week’s results include an adjustment for the Veterans Day holiday.

Added Kan, “Purchase applications were 7 percent higher than a year ago, which adds another solid data point to the recent increases in new home sales and housing starts. There may be signs that housing inventory is starting to meaningfully rise, which will help with affordability and provide more choices for potential homebuyers.”
...
The average contract interest rate for 30-year fixed-rate mortgages with conforming loan balances ($484,350 or less) decreased to 3.99 percent from 4.03 percent, with points increasing to 0.33 from 0.31 (including the origination fee) for 80 percent loan-to-value ratio (LTV) loans.
emphasis added 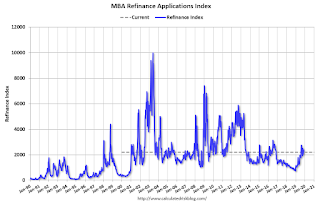 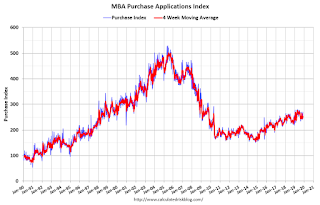