The Dodge Momentum Index increased 6.9% in October to 152.6 (2000=100) from the revised September reading of 142.7. The Momentum Index, issued by Dodge Data & Analytics, is a monthly measure of the first (or initial) report for nonresidential building projects in planning, which have been shown to lead construction spending for nonresidential buildings by a full year. October’s increase was due entirely to a recovery in institutional planning projects, which had stepped back over the previous few months. Institutional planning moved 22.8% higher in the month while commercial planning lost 0.5%.

Despite the October increase, institutional projects entering planning remain 4.3% lower on a year-over-year basis compared to October 2018. Commercial projects meanwhile are 14.3% higher than October 2018 as several mega projects have entered the early stages of planning over the last several months. The overall Momentum Index is 6.7% higher than a year ago, although its level remains below the July 2018 peak.
emphasis added 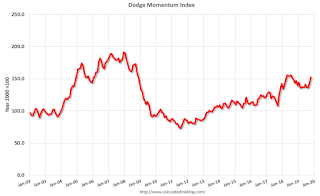 According to Dodge, this index leads "construction spending for nonresidential buildings by a full year".  After declining late last year, this index moved mostly sideways in 2019, and has increased recently.
Posted by Calculated Risk on 11/12/2019 10:43:00 AM
Newer Post Older Post Home