From Jan Freitag at HotelNewsNow.com: US hotels post RevPAR losses for second month in 2019 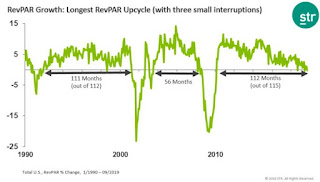 The RevPAR upcycle is now in its 115th month, and 112 of those months had positive RevPAR change. So, I wonder if it’s time to retire the term “upcycle” if RevPAR is declining, as it did in September. The long-run monthly RevPAR growth chart now looks like this, but the header needs a qualifier (“three small interruptions”) and so it may be time to come up with a better descriptor.

From HotelNewsNow.com: STR: US hotel results for week ending 26 October


The U.S. hotel industry reported overall flat year-over-year results in the three key performance metrics during the week of 20-26 October 2019, according to data from STR.

In comparison with the week of 21-27 October 2018, the industry recorded the following: 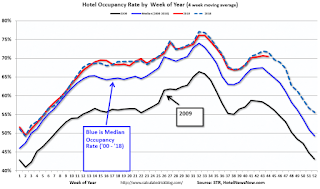 Seasonally, the 4-week average of the occupancy rate will now start to decline into the winter.