With a Hat Tip to Neil Irwin (he started doing this several years ago) ... here are five economic reasons to be thankful this Thanksgiving ... 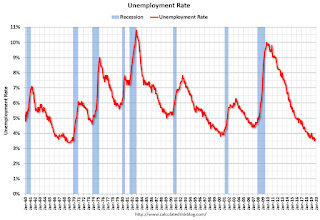 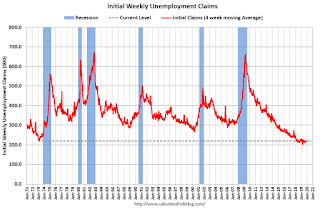 The number of new claims for unemployment insurance benefits is close to the lowest level since the 1960s (with a much smaller population back then).  The four week average of new unemployment has fallen to 220,000, about the same as a year ago, and down from the peak of 660,000 during the great recession.

Here is a graph of initial weekly unemployment claims.

The dashed line on the graph is the current 4-week average. The four-week average of weekly unemployment claims is at 219,750.

There were 7.0 million job openings in September. This is still solid, but down from 7.6 million in September 2018. 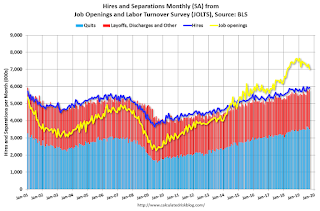 Also Quits are up 3% year-over-year. These are voluntary separations. (see light blue columns at bottom of graph for trend for "quits").

A large number of job openings, and rising quits, are positive signs for the labor market.

4) New Home sales are at a Cycle High. 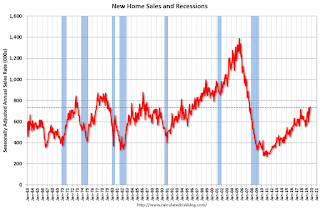 This graph shows New Home Sales vs. recessions since 1963. The dashed line is the current sales rate.

Since New Home sales are an excellent leading indicator for the economy, the new cycle high suggests no recession in the next year.

Household debt burdens have declined sharply since the great recession. 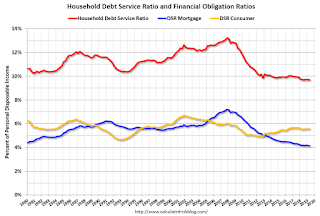 The graph, based on data from the Federal Reserve, shows the Total Debt Service Ratio (DSR), and the DSR for mortgages (blue) and consumer debt (yellow).

The overall Debt Service Ratio decreased in Q2 2018, and has been mostly moving sideways and is at a series low.  Note: The financial obligation ratio (FOR) declined in Q2 and is also near a series low (not shown).

The DSR for mortgages (blue) is also at a series low (since at least 1980).  This ratio increased rapidly during the housing bubble, and continued to increase until 2007.

Happy Thanksgiving to All!