This gives a total of 4.05% delinquent or in foreclosure.


Today, the Data & Analytics division of Black Knight, Inc. released its latest Mortgage Monitor Report, based upon the company’s industry-leading mortgage performance, housing and public records datasets. This month, Black Knight looked at the current trend of rising early-stage delinquencies, particularly among purchase loans. As Black Knight Data & Analytics President Ben Graboske explained, the number of loans that were delinquent six months following origination has been increasing over the past 24 months, with first-time homebuyers being impacted most heavily.

“We’ve seen early-stage delinquencies rise over the last several years, with the increase being driven primarily by purchase loans,” said Graboske. “About 1% of loans originated in Q1 2019 were delinquent six months after origination. While that’s less than one-third of the 2000-2005 average of 2.95%, it represents a more than 60% increase over the last two years and is the highest it’s been since late 2010. Early-stage GSE delinquencies currently stand at 0.6%, up two tenths of a percentage point over the past 24 months, but still 40% below the market average and 60% below their own 2000-2005 average of 1.3%. Though there has been some softening in GSE purchase loan performance, it hasn’t been to the extent seen among entry-level buyers. All in all, first-time homebuyer originations combined between the GSEs and GNMA increased by nearly 50% between 2014 and 2018. However, whereas first-time homebuyers represent just over 40% of GSE purchase loans, they make up 70% of the GNMA purchase market.

“That concentration is contributing to a more significant increase in early-stage delinquencies among GNMA loans, which saw 3.3% of loans delinquent six months after origination. That’s up 1.2 percentage points from two years ago, and though still roughly half the 2000-2005 pre-crisis average, it represents the sharpest increase we’ve seen in the market in recent years. However, performance among repeat purchasers with GNMA-securitized loans has remained relatively steady overall, with the rise more pronounced among first-time homebuyers. Rising debt-to-income ratios due to tight affordability and declining first-time homebuyer credit scores stand out as likely drivers here. With a growing population of first-time homebuyers poised to enter the market, this is a trend Black Knight will continue to monitor.”
emphasis added 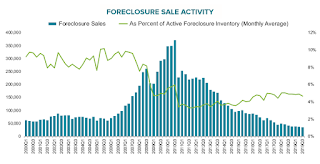 Here is a graph from the Mortgage Monitor that shows the Foreclosure Sales over time.


• Foreclosure sales (completions) are down 14% year-over-year, and have now set new record lows in each of the past five quarters

• Despite having the largest number of foreclosure sales, Florida's sale activity declined by 19% from the year prior, while in New York, sales actually edged slightly upward year-over-year (+4% Y/Y) 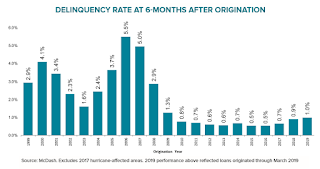 • This increase has primarily been driven by a rise in early-stage delinquencies among purchase loans, and to a lesser degree by cash-out refinances

• While performance of rate/term refinances has remained relatively flat, early-stage delinquencies among cash-out refis – though lower than the market as a whole – have also moved upward in recent years

• Should the rise in delinquencies among more recent originations continue, we may ultimately see an increase in overall delinquency rates