The unemployment rate declined to 3.5 percent in September, and total nonfarm payroll employment rose by 136,000, the U.S. Bureau of Labor Statistics reported today. Employment in health care and in professional and business services continued to trend up.
...
Employment in government continued on an upward trend in September (+22,000). Federal hiring for the 2020 Census was negligible (+1,000).
...
The change in total nonfarm payroll employment for July was revised up by 7,000 from +159,000 to +166,000, and the change for August was revised up by 38,000 from +130,000 to +168,000. With these revisions, employment gains in July and August combined were 45,000 more than previously reported.
...
In September, average hourly earnings for all employees on private nonfarm payrolls, at $28.09, were little changed (-1 cent), after rising by 11 cents in August. Over the past 12 months, average hourly earnings have increased by 2.9 percent.
emphasis added 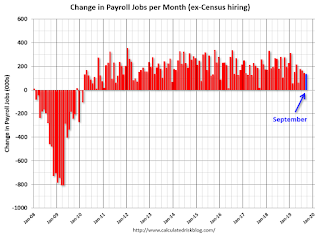 Payrolls for July and August were revised up 45 thousand combined. 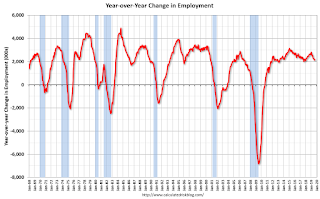 In September, the year-over-year change was 2.147 million jobs. 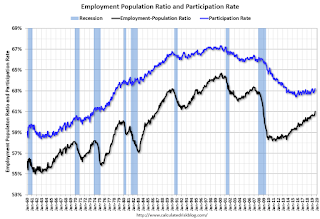 The Labor Force Participation Rate was unchanged in September at 63.2%. This is the percentage of the working age population in the labor force.   A large portion of the recent decline in the participation rate is due to demographics and long term trends. 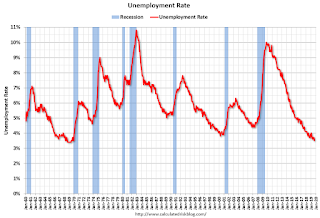 This was below consensus expectations of 145,000 jobs added, however July and August were revised up by 45,000 combined.