Both the national average asking rent and effective rent, which nets out landlord concessions, increased 0.6% in the third quarter. At $34.06 per square foot (asking) and $27.65 per square foot (effective), the average rents have increased 2.6% from the third quarter of 2018.
...
Office occupancy growth has been sluggish throughout this expansion as firms lease far fewer square feet per added job. Rent growth has also disappointed owners. Each quarter seems to bring more cautiousness as firms weather continued uncertainty from the trade war and global economy. Still, the U.S. has added 350,000 office jobs this year through August, down from 470,000 office jobs added in the first eight months of 2018, but further evidence of steady growth. This should keep office occupancy growth positive. Indeed, the news on the office market has not generated headlines, but growth remains positive and should remain positive this year and next. 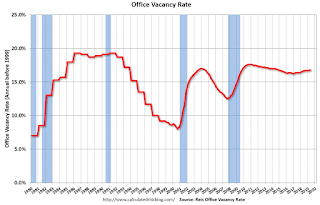 Reis reported the vacancy rate was at 16.8% in Q3.  The office vacancy rate had been mostly moving sideways at an elevated level, but has increased over the last two years.