The Census Bureau released the Residential Vacancies and Homeownership report for Q3 2019.

This survey might show the trend, but I wouldn't rely on the absolute numbers. he Census Bureau is investigating the differences between the HVS, ACS and decennial Census, and analysts probably shouldn't use the HVS to estimate the excess vacant supply or household formation, or rely on the homeownership rate, except as a guide to the trend. 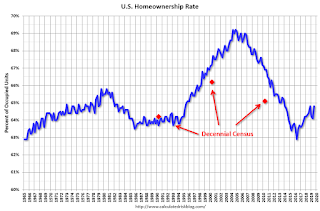 I'd put more weight on the decennial Census numbers.  However, given changing demographics, the homeownership rate has bottomed. 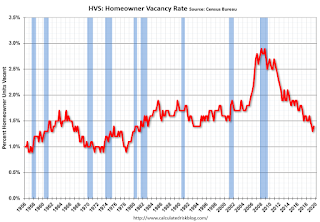 The HVS homeowner vacancy increased to 1.4% in Q3. 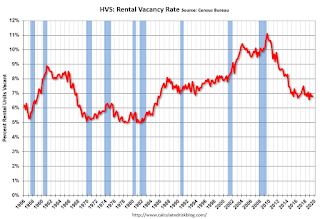 The rental vacancy rate was unchanged at 6.8% in Q3.

Overall this suggests that vacancies have declined significantly, and my guess is the homeownership rate has bottomed - and that the rental vacancy rate is close to the bottom for this cycle.
Posted by Calculated Risk on 10/29/2019 11:42:00 AM
Newer Post Older Post Home