From HotelNewsNow.com: STR: US hotel results for week ending 5 October


The U.S. hotel industry reported negative year-over-year results in the three key performance metrics during the week of 29 September through 5 October 2019, according to data from STR.

In comparison with the week of 30 September through 6 October 2018, the industry recorded the following:

STR analysts attribute significant performance decreases in many markets to the Rosh Hashanah calendar shift. Travel and conference schedules during the comparable time period last year were not affected by the Jewish holidays.
emphasis added 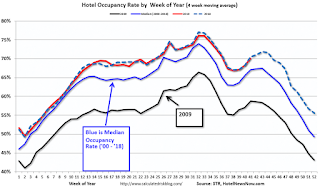