From the Dallas Fed: Pace of Texas Manufacturing Expansion Slows, but Outlook Improves


Texas factory activity continued to expand in October, albeit at a markedly slower pace, according to business executives responding to the Texas Manufacturing Outlook Survey. The production index, a key measure of state manufacturing conditions, fell nine points to 4.5, suggesting a moderation in output growth in October.

Other measures of manufacturing activity also suggested slower expansion in October, and demand declined. The new orders index turned negative for the first time in three years, falling 11 points to -4.2. The growth rate of orders index also fell into negative territory, coming in at -5.9. The capacity utilization index retreated from 12.0 to 3.6, reaching a three-year low. The shipments index fell nine points to 6.0.

Perceptions of broader business conditions were mixed in October. The general business activity index fell from 1.5 to -5.1, returning to negative territory after two months of positive readings. The company outlook index continued to increase, inching up to 8.8 this month. The index measuring uncertainty regarding companies’ outlooks remained slightly elevated at 12.1.

Labor market measures suggested slower growth in employment and work hours this month. The employment index remained positive but retreated from 18.8 to 11.0, a reading still above average.
emphasis added

This was the last of the regional Fed surveys for September. 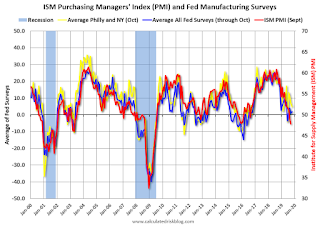 Based on these regional surveys, it seems likely the ISM manufacturing index for October will be weak again.
Posted by Calculated Risk on 10/28/2019 10:36:00 AM
Newer Post Older Post Home