This gives a total of 3.93% delinquent or in foreclosure.

“Back in November 2018, we were reporting on home affordability hitting a nine-year low,” said Graboske. “Interest rates were nearing 5%, pushing the share of national median income required to make the principal and interest (P&I) payments on the purchase of the average-priced home to 23.7%. While still below long-term averages, that made housing the least affordable it had been since 2009, spurring a noticeable and extended slowdown in home price growth. In the time since, rates have tumbled and the affordability outlook has improved significantly. That payment-to-income ratio is now 20.7%, which is the second lowest it has been in 20 months, behind only August of this year, and about 4.5% below the long-term, pre-crisis norm. To help quantify the boost this has given to homebuyers, consider that today’s prevailing 30-year rate has cut the monthly P&I payment to purchase the average-priced home by 10% – about $124 per month – from November. Put another way, the decline in rates since November has been enough to boost buying power by $46,000 while keeping monthly P&I payments the same.

“Despite falling interest rates and steadily improving affordability over the preceding eight months, annual home price growth held flat in August at 3.8% after rising for the first time in 17 months in July. It remains to be seen if this is merely a lull in what could be a reheating housing market, or a sign that low interest rates and stronger affordability may not be enough to muster another meaningful rise in home price growth across the U.S. That the strongest gains in – and strongest levels of – affordability were in August and early September could bode well for September/October housing numbers. As such, we’ll be keeping a close eye on the numbers coming out of the Black Knight Home Price Index over the coming months.”
emphasis added 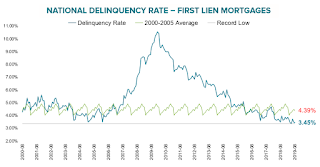 • Over the past 18 years, delinquencies have fallen by 0.2% on average for the month, making August the most seasonally neutral month

• In contrast, September tends to see the largest seasonal upward pressure on delinquency rates of any month (+5.2% on average since 2000), so upward movement next month would not be surprising 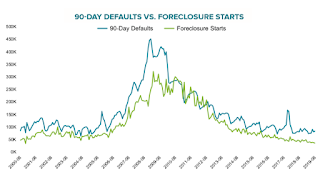 • Foreclosure starts hit an 18-year low in August, but defaults have shown signs of upward movement in recent months

• One contributing factor has been the severe early-2018 flooding in the Midwest, with defaults in the region rising by 10% from the year prior » August also saw defaults increase in the south (+8%) and the Northeast (+4.5%)

• Though default activity remains historically low, this is a trend worth watching