Mortgage applications decreased 3.1 percent from one week earlier, according to data from the Mortgage Bankers Association’s (MBA) Weekly Mortgage Applications Survey for the week ending August 30, 2019.

Added Kan, “Purchase applications increased 1 percent last week and were 5 percent higher than a year ago. Consumers continue to act on these lower rates, but the volatility in the market is likely leading some borrowers to pause refinancing and buying decisions.”
...
The average contract interest rate for 30-year fixed-rate mortgages with conforming loan balances ($484,350 or less) decreased to 3.87 percent from 3.94 percent, with points decreasing to 0.34 from 0.38 (including the origination fee) for 80 percent loan-to-value ratio (LTV) loans.
emphasis added 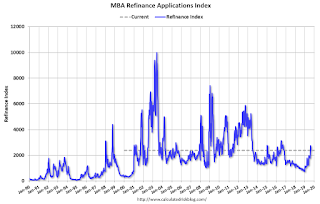 Mortgage rates have declined from close to 5% late last year to under 4%.

With lower rates, we saw a recent sharp increase in refinance activity. 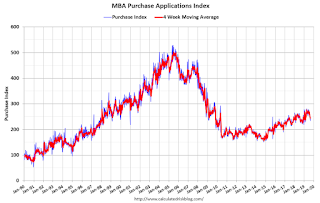