From HotelNewsNow.com: STR: US hotel results for week ending 31 August


The U.S. hotel industry reported mostly positive year-over-year results in the three key performance metrics during the week of 25-31 August 2019, according to data from STR.

In comparison with the week of 26 August through 1 September 2018, the industry recorded the following:

Due to the anticipation of Hurricane Dorian, the three largest hotel markets in Florida each reported significant declines in occupancy on Friday and Saturday.
emphasis added 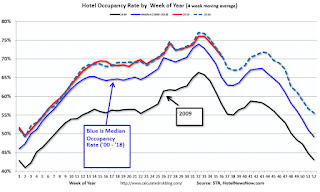 However occupancy will be lower this year than in 2018 (the record year), unless there is a strong boost due to hurricane impacted areas.

Seasonally, the occupancy rate will now decline until the Fall business travel season.