It seems clear that U.S. railroads are facing a freight recession. Total originated U.S. rail carloads fell 4.6% in August 2019 from August 2018, their seventh straight year-over-year decline. The average decline over those seven months was 4.2%, a not-insignificant amount. Meanwhile, U.S. intermodal volume fell 5.4% in August, also the seventh straight monthly decline. … Why? The parts of the economy that generate much of the freight that railroads carry — manufacturing and goods trading — have weakened significantly over the past several months.
emphasis added 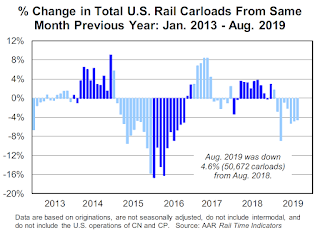 This graph from the Rail Time Indicators report shows the year-over-year changes in U.S. Carloads. 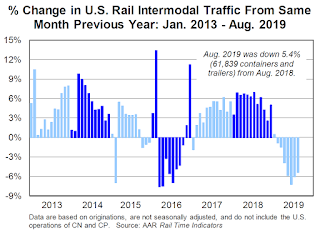 The second graph is the year-over-year change for intermodal traffic (using intermodal or shipping containers):

So far, U.S. rail traffic appears to be mirroring what happened in late 2015 and 2016, when it fell for 13 out of 14 months. Back then, there was a freight recession, but not an economywide recession. We appear to be in another freight recession now. Whether the same thing happens this time around — the overall economy wobbles but doesn’t fall down1 — remains to be seen, but railroads are already suffering. One reason why is that the ongoing trade war and accompanying uncertainty has had the most direct impact on manufacturing and commodity-related industries that are heavily served by railroads but that comprise only a moderate share of the overall economy.