The Federal Reserve Bank of New York’s Center for Microeconomic Data today issued its Quarterly Report on Household Debt and Credit, which shows that total household debt increased by $192 billion (1.4%) to $13.86 trillion in the second quarter of 2019. It was the 20th consecutive quarter with an increase, and the total is now $1.2 trillion higher, in nominal terms, than the previous peak of $12.68 trillion in the third quarter of 2008.

Mortgage balances—the largest component of household debt—rose by $162 billion in the second quarter to $9.4 trillion, surpassing the high of $9.3 trillion in the third quarter of 2008. Mortgage originations, which include mortgage refinances, also increased by $130 billion to $474 billion, the highest volume seen since the third quarter of 2017.
…
“While nominal mortgage balances are now slightly above the previous peak seen in the third quarter of 2008, mortgage delinquencies and the average credit profile of mortgage borrowers have continued to improve,” said Wilbert van der Klaauw, senior vice president at the New York Fed. “The data suggest a more nuanced picture for other forms of household debt, with credit card delinquency rates continuing to rise.”
emphasis added 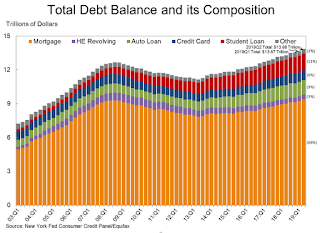 
Aggregate household debt balances increased by $192 billion in the second quarter of 2019, a 1.4% increase, and now stand at 13.86 trillion. Balances have been steadily rising for five years and in aggregate are now $1.2 trillion higher, in nominal terms, than the previous peak (2008Q3) peak of $12.68 trillion. Overall household debt is now 24.3% above the 2013Q2 trough. 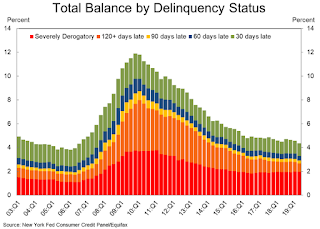 The overall delinquency rate decreased in Q2.  From the NY Fed:


Aggregate delinquency rates improved in the second quarter of 2019. As of June 30, 4.4% of outstanding debt was in some stage of delinquency. Of the $604 billion of debt that is delinquent, $405 billion is seriously delinquent (at least 90 days late or “severely derogatory”, which includes some debts that have previously been charged off although the lenders are continuing collection attempts). The share of credit card balances transitioning into 90+ day delinquency has been rising since 2017, and continued to do so in Q2. Meanwhile the flow into 90+ day delinquency for auto loan balances has risen more than 70 bps since 2012 and experienced a slight seasonal decline this quarter. Student loan delinquency transition rates remain at high levels relative to other types of debt, and increased this quarter; 9.9% of student loan balances became seriously delinquent in the second quarter (at an annual rate).