With the ten year yield at 1.63%, and based on an historical relationship, 30-year rates should currently be around 3.5%.


Mortgage rates hit their lowest levels since November 2016 late last week and they've proceeded to set a new long-term low each day since then. [30YR FIXED - 3.5% - 3.75% (wider range than normal due to volatility)]
emphasis added

The graph shows the relationship between the monthly 10 year Treasury Yield and 30 year mortgage rates from the Freddie Mac survey. 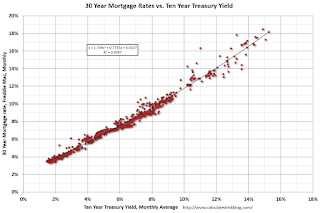 Currently the 10 year Treasury yield is at 1.63%, and 30 year mortgage rates were at 3.75% according to the Freddie Mac survey last week - and rates will probably be lower in the survey for this week.

To fall to 3.31% on the Freddie Mac survey, and based on the historical relationship, the Ten Year yield would have to fall to around 1.4% (but there is some variability in the relationship).