Mortgage applications increased 5.3 percent from one week earlier, according to data from the Mortgage Bankers Association’s (MBA) Weekly Mortgage Applications Survey for the week ending August 2, 2019.

Added Fratantoni, “Lower mortgage rates did not pull more homebuyers into the market, as purchase volume slipped a bit last week, but still remains around 7 percent ahead of last year’s pace.”
...
The average contract interest rate for 30-year fixed-rate mortgages with conforming loan balances ($484,350 or less) decreased to 4.01 percent from 4.08 percent, with points increasing to 0.37 from 0.34 (including the origination fee) for 80 percent loan-to-value ratio (LTV) loans.
emphasis added 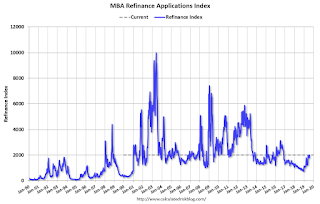 Mortgage rates have declined from close to 5% late last year to around 3.6% this week (expect a further drop in rates in the MBA survey next week).

We should see a further increase in refinance activity next week. 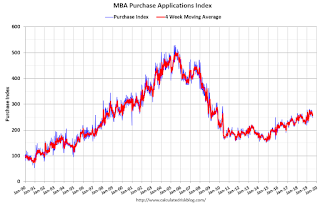