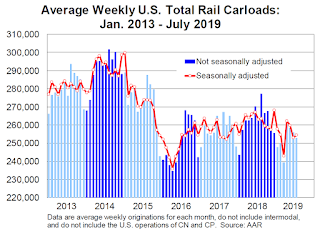 This graph from the Rail Time Indicators report shows U.S. average weekly rail carloads (NSA).
Rail carloads have been weak over the last decade due to the decline in coal shipments. 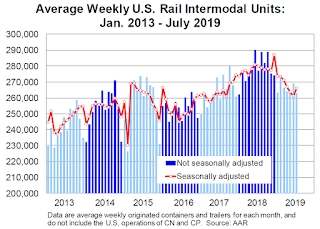 
U.S. intermodal originations totaled 1.31 million containers and trailers in July 2019, down 84,878 units from July 2018. The 6.1% decline was the sixth straight monthly decline on a year-over-year basis.

For the first seven months of 2019, intermodal was down 314,125 units (3.7%). Though the decline from 2018 is significant, U.S. intermodal volume through July of this year was higher than every year except 2018 — so the current pace is not as slow as it feels. Intermodal traffic was especially strong during the last five months of 2018, which will make for challenging comps for the remainder of 2019.