The tax changes at the end of 2017 have had minimal impact on GDP. Most forecasts showed some minor boost in 2018 and 2019 followed by a minor drag starting in 2020. With the new budget agreement, there probably will be little drag from fiscal policy next year.

Also, as shown earlier, there was no investment boom following the tax changes.

However, the tax changes did result in a large increase in the budget deficit (as predicted by all competent analysts). 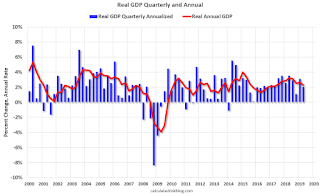 This rate of growth is about what we should expect, see: Demographics and GDP: 2% is the new 4%