Mortgage applications decreased 2.4 percent from one week earlier, according to data from the Mortgage Bankers Association’s (MBA) Weekly Mortgage Applications Survey for the week ending July 5, 2019. This week’s results include an adjustment for the Fourth of July holiday.

... The Refinance Index decreased 7 percent from the previous week and was 88 percent higher than the same week one year ago. The seasonally adjusted Purchase Index increased 2 percent from one week earlier. The unadjusted Purchase Index decreased 18 percent compared with the previous week and was 6 percent higher than the same week one year ago.
...
“Mortgage applications were down slightly, even after adjusting for the July 4th holiday, as we saw opposing moves in purchase and refinance applications over the week. Purchase applications increased from the previous week and were up 5 percent from a year ago, a continuation of the strong annual growth that we saw in the first half of 2019. Refinance activity decreased over 6 percent and the refinance share of applications fell back below 50 percent, even as the 30-year, fixed-rate declined 3 basis points to 4.04 percent," said Joel Kan, MBA’s Associate Vice President of Economic and Industry Forecasting. "Borrowers have been less sensitive to low rates as many borrowers have either recently refinanced or are likely waiting for rates to fall even further. Other mortgage rates in our survey were unchanged or slightly higher than in the previous week.”
...
The average contract interest rate for 30-year, fixed-rate mortgages with conforming loan balances ($484,350 or less) decreased to 4.04 percent from 4.07 percent, with points increasing to 0.37 from 0.36 (including the origination fee) for 80 percent loan-to-value ratio (LTV) loans.
emphasis added 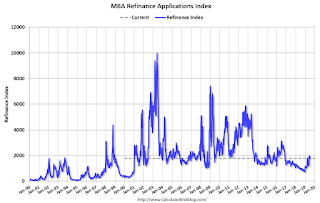 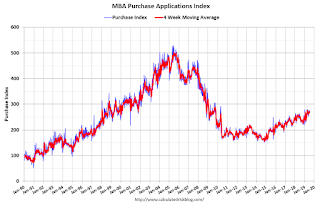