Industrial production was unchanged in June, as increases for both manufacturing and mining offset a decline for utilities. For the second quarter as a whole, industrial production declined at an annual rate of 1.2 percent, its second consecutive quarterly decrease. In June, manufacturing output advanced 0.4 percent. An increase of nearly 3 percent for motor vehicles and parts contributed significantly to the gain in factory production; excluding motor vehicles and parts, manufacturing output moved up 0.2 percent. The output of utilities fell 3.6 percent as milder-than-usual temperatures in June reduced the demand for air conditioning. The index for mining rose 0.2 percent. At 109.6 percent of its 2012 average, total industrial production was 1.3 percent higher in June than it was a year earlier. Capacity utilization for the industrial sector decreased 0.2 percentage point in June to 77.9 percent, a rate that is 1.9 percentage points below its long-run (1972–2018) average.
emphasis added 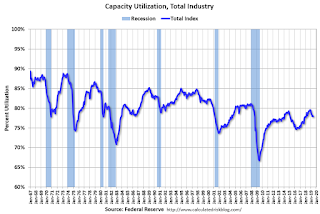 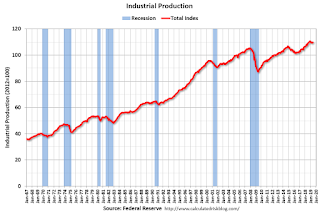 Industrial production was unchanged in June at 109.2. This is 26% above the recession low, and 4.0% above the pre-recession peak.

The change in industrial production and decrease in capacity utilization were below consensus.
Posted by Calculated Risk on 7/16/2019 09:22:00 AM
Newer Post Older Post Home