Richmond Fed: "Fifth District Manufacturing Was Moderate in May"

From the Richmond Fed: Fifth District Manufacturing Was Moderate in May


Fifth District manufacturing activity was moderate in May, according to the most recent survey from the Federal Reserve Bank of Richmond. The composite index inched up from 3 in April to 5 in May, as shipments and new orders had fairly flat reading and the third component, employment, remained positive. Firms reported growth in spending and positive overall business conditions and remained optimistic about growth in the coming months.

Survey results indicated that employment and wages grew in May, while the indicator for average workweek recovered from its negative April reading. However, firms continued to struggle to find workers with the necessary skills as this index dropped from −8 in April to −20 in May. Respondents expected this struggle to continue but to see further growth in employment and wages in the next six months.
emphasis added 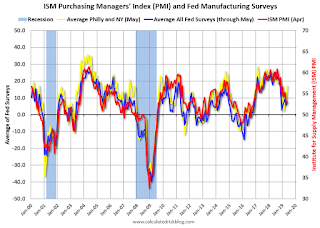 The surveys were mixed in May, but based on these regional surveys, it seems likely the ISM manufacturing index will be at a higher level in May than in April.
Posted by Calculated Risk on 5/29/2019 10:05:00 AM
Newer Post Older Post Home