From the Philly Fed: May 2019 Manufacturing Business Outlook Survey


Results from the May Manufacturing Business Outlook Survey suggest continued growth for the region’s manufacturing sector. The survey’s indexes for general activity, shipments, and employment increased from their April readings. The new orders index remained positive but decreased modestly. The survey’s future activity index, after falling in recent months, was little changed, while the firms’ forecast for future employment improved.

The diffusion index for current general activity increased from 8.5 in April to 16.6 this month.
...
On balance, the firms continued to report increases in employment. The employment diffusion index increased 4 points to 18.2, its highest reading in five months.
emphasis added 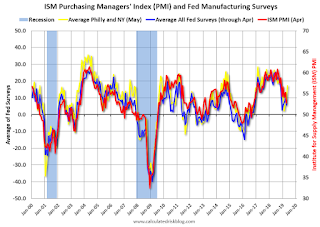 These early reports suggest the ISM manufacturing index will show expansion again in May, and probably at about the faster pace than in April.
Posted by Calculated Risk on 5/16/2019 10:56:00 AM
Newer Post Older Post Home