The Federal Reserve Bank of New York’s Center for Microeconomic Data today issued its Quarterly Report on Household Debt and Credit, which shows that total household debt increased by $124 billion (0.9%) to $13.67 trillion in the first quarter of 2019. It was the 19th consecutive quarter with an increase, and the total is now $993 billion higher than the previous peak of $12.68 trillion in the third quarter of 2008. The Report is based on data from the New York Fed’s Consumer Credit Panel, a nationally representative sample of individual- and household-level debt and credit records drawn from anonymized Equifax credit data.
...
"The rate at which credit card balances become delinquent has been rising, and that has coincided with an increase in younger borrowers entering the credit card market,” said Andrew Haughwout, senior vice president at the New York Fed. “However, these delinquency rates are increasing from historically low levels and remain below pre-financial-crisis levels.”
…
Mortgage balances rose by $120 billion, to $9.2 trillion.

Mortgage originations declined to $344 billion from $401 billion, the lowest level seen since the third quarter of 2014.

Mortgage delinquencies improved slightly, with 1.0% of mortgage balances 90 or more days delinquent, down from 1.1% in the fourth quarter of 2018.
emphasis added 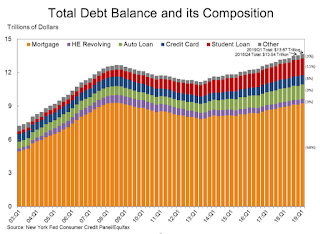 Mortgage balances shown on consumer credit reports on March 31 stood at $9.2 trillion, a $120 billion increase from 2018Q4. Balances on home equity lines of credit (HELOC) declined modestly, by $6 billion, continuing their declining trend from 2009. HELOC balances are now at $406 billion. Non-housing balances increased by $10 billion in the first quarter, with a small increase in auto loan balances ($6 billion), a $29 billion increase in student loan balances, offset by a $22 billion decline in credit card balances.

New extensions of credit for mortgage and auto loans slowed in the first quarter. Mortgage originations, which we measure as appearances of new mortgage balances on consumer credit reports and which include refinanced mortgages, were at $344 billion, a notable decline from the volume seen in 2018Q4 and the lowest quarterly volume observed since 2014Q3. There were $139 billion in newly originated auto loans in the first quarter of 2019, a modest decline from the fourth quarter but higher than the volume observed in 2018Q1. The aggregate credit card limit rose for the 25th consecutive quarter, with a 1.3% increase from 2018Q4. 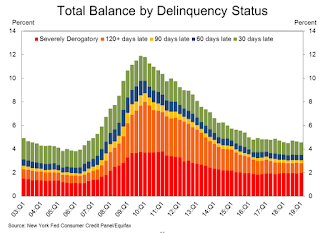 The overall delinquency rate decreased slightly in Q1.  From the NY Fed: